The music follows no conventions and mixes influences from a wide range of sources, from alternative rock to electronic dance music. Mostly it involves heavy beats and fat lo-bit basslines, and it's usually suitable for dancing.

Cornbeast is primarily a live act. To date I have made more than 20 gigs, which always are very energetic and passionate, and features me "dancing", sweating, joking and fiddling around with my music gear.

Cornbeast is the alter-ego of Fredrik Stolpe who lives in Stockholm, Sweden.

I'm also involved in arrainging clubs, concerts and workshops in the field of experimental electronic music, chip music and circuit-bending, among them the now resting chip-/micromusic club Microdisko.

Don't hesitate to contact me to book be for a gig, release my music or for whatever reason. Email me: my artist name @ cornbeast.com.

You can also hook up with me on myspace and facebook. 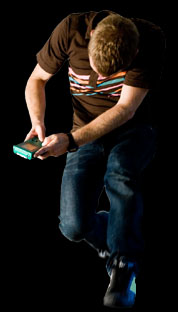